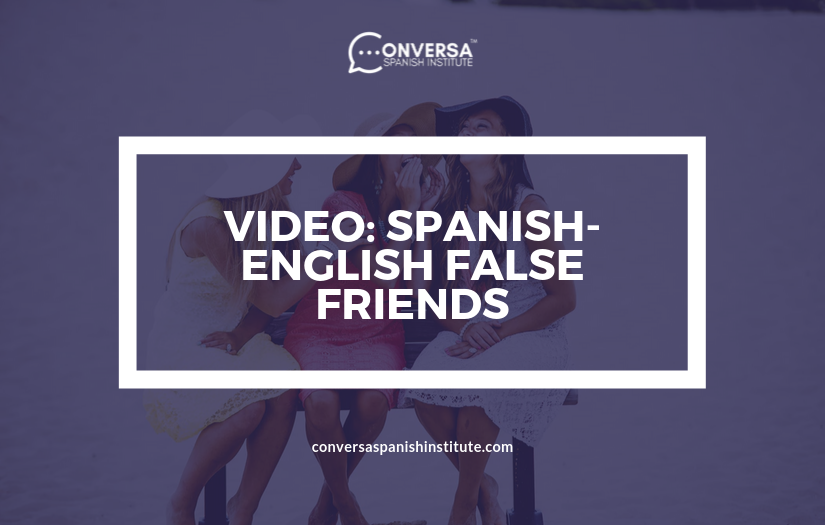 When you are learning a new language, there are always false friends that make things a little more complicated. So in this post we are going to talk about them and see some examples. It’s not easy to learn all of them as a vocabulary list. You just have to practice with them individually, in a context, so you will be able to recognice this words and don’t fall in its tramp.

What is a false friend?

A false friend is a word in Spanish that looks like a word in English but both have completely different meanings. This happens because, sometimes, two words in two different languages have the same origin but they are used in different situations. That can mean trouble because, in some situations, you can be completely missunderstanding. For example, “Estoy embarazada” doesn’t mean “I’m embarrased”, but “I’m pregnant”, and “Estoy constipada” doesn’t mean “I’m constipated”, but “I have a cold”. That can create hilarious situations. If you read anywhere a Spanish sentence and it doesn’t have any sense for you, maybe it’s because a false friend. Let’s see some of them.

This two words talk about places where you can find books. The difference is that in one of them you can read them and in the other want you have to buy them if you want to read them. Librería is not library, but bookshop. So how is “library” said in Spanish? It is Biblioteca, because of his latin origin (biblio means book).

They are pretty similar, but their meanings are completely different. The Spanish one is related to the previous pair: lectura means reading. On the other hand, lecture in Spanish means conferencia.

“To introduce someone” can’t be translated by “introducir a alguien”. That would be very confusing. Introducir means to insert; and to introduce is presentar in Spanish.

Bombero looks like something related to booms, like bomber, but it means firefighter. Its origins is the onomatopoeia boom. Bomber in Spanish is bombardero.

Codo can remind you of “code”, but it’s nothing related to password: its meaning is elbow. In Spanish, code is código, contraseña or pin (because of the mobile phone sim).

This is other example of words that look similar but have completely different meanings. Casualidad  is a coincidence, something not planned; in Spanish, casualty is víctima. This false friends are more conflictive for Spanish people than English people.

Sometimes, false friends don’t mean exactly the same but they are related in any way. This is not one of these cases. Delito means crime, something against the law, and delight is something really good, in Spanish: delicia, deleite.

These are some of the Spanish-English false friends that you can find. In this video, you will learn some more.

Learning false friends in Spanish isn’t an easy task, that’s why our lovely Laura and Jack are going to explain the differences: