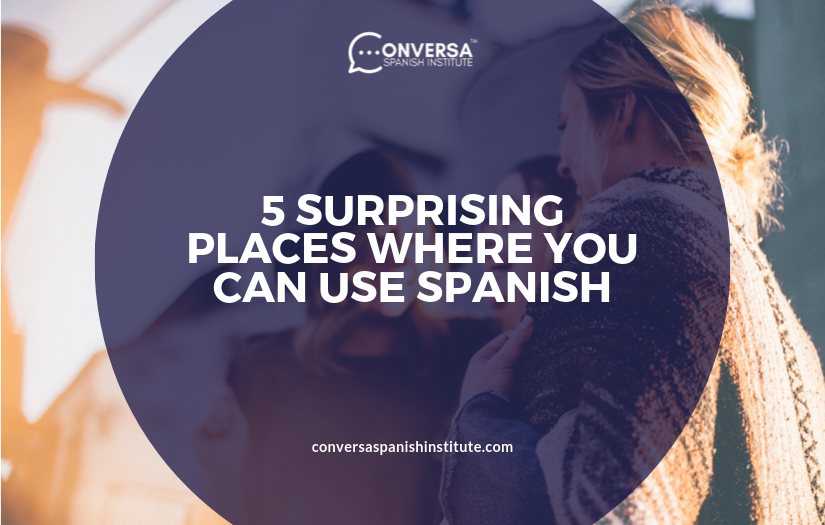 5 Surprising Places Where You Can Use Spanish

Did you know there are 21 countries in the world where Spanish is spoken? While Spanish may not be the official language in these countries, some of the places where you would be able to use your Spanish speaking skills may surprise you. While you may not be traveling to Equatorial Guinea in Africa anytime soon, you may not realize that any African country includes Spanish as a used language. The more obvious locations would include Europe’s Spain, and locations in the Caribbean, and in South and Central America.

In fact, Spanish is spoken natively by more people in the world than English. There are only approximately 360 million native English speakers, compared to more than 400 million people who speak Spanish natively.

Here are some surprising places where you may not think you can speak Spanish, but there may be Spanish-speakers just waiting to hear hola, ¿qué tal?, instead of “hello, how are you” as an invitation to start speaking Spanish.

With the number of people who speak Spanish either natively or as a second language, it’s probable that someone in your workplace speaks Spanish, and would possibly enjoy speaking it at least occasionally each day. In addition, Spanish may be a completely acceptable first or second language to use in the workplace. Anti-Discrimination Laws protect the use of different languages in the workplace and govern the indication that any workplace be designated as English-speaking only.

It’s obvious to speak Spanish during Spanish class, but why stop there? If Spanish is one of your courses of study at school, take it outside of the classroom and use it in the hallways and around the school grounds. You can do this with classmates, and you may find others who can speak the language or want to practice it with you. Consider using Spanish when you’re in the cafeteria line or asking questions in one of the offices. Who knows? You might run into people who will prefer to speak Spanish over English.

It’s a given when you visit a Spanish-speaking country that the employees at restaurants and shops will speak the language. But many employees of stores and other establishments in your local area may speak Spanish either natively, or as an additional language. The next time you place an order, ask for a particular clothing size, or even pose a question, start in Spanish. The worst-case scenario is that the response is no hablo español (I don’t speak Spanish), and you can then carry on in English.

Whether it’s for work or pleasure, it’s probable that someone in the crowd, on a panel, or at a booth at a conference speaks Spanish. Maybe you won’t want to try starting a conversation by using Spanish, but if you listen to people speaking, maybe you can catch someone else using the language, and you can join in with your thoughts on the topic.

Whether you’re traveling to a Spanish-speaking country, or somewhere else entirely, the airport is a great place to consider using your Spanish skills. At the check-in, in the shops, in the waiting area, or even if you just want to thank a member of the airport staff, you could try speaking Spanish. And why stop there? While you’re on the plane, try speaking in Spanish to the flight crew, or even to people seated nearby.

The key to learning Spanish – or learning any language – is to use it as much as possible. Try to start conversations in Spanish when you’re eating out, shopping, or at school or work, and see who responds. There could be plenty of people who speak the language and would love to use it as part of their daily routine.