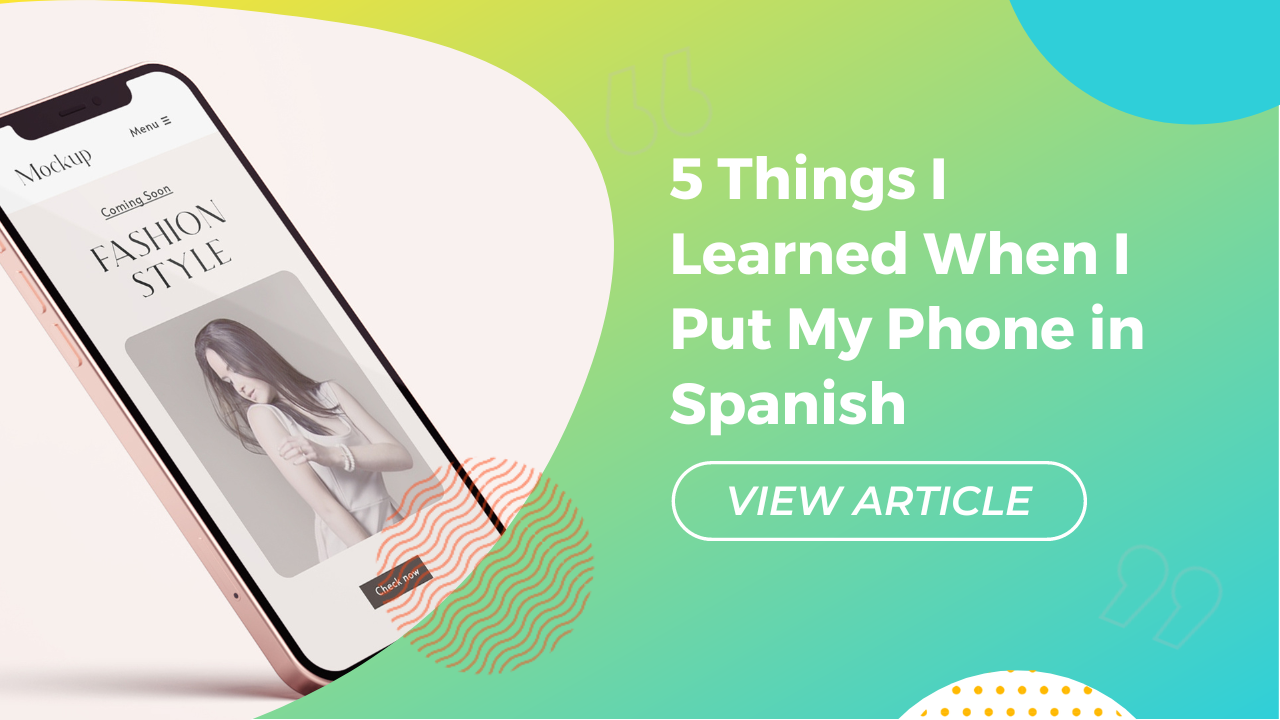 5 Things I Learned When I Put My Phone in Spanish

When I was first taking Spanish courses, my textbook still taught the words for cassette tapes. By the time I was preparing to move to Salamanca, Spain, I realized that although I felt prepared to communicate and live entirely in Spanish, I noticed one huge gap in my knowledge: technology vocabulary. So, what did I do? I put my phone in Spanish to practice.

You don’t even realize you need to know these words until you want to ask someone for their Snapchat, or are trying to help your host family update an app. Nowadays, knowing vocabulary for your phone in Spanish is just as important as knowing how to describe your sickness to a doctor while studying abroad. I’ll share with you 5 things I learned when I first put my phone in Spanish.

Like I mentioned earlier, I realized I actually didn’t know too many Spanish words for technology. However, I thought cognates would help me. This was true for some words like la aplicación looks a lot like application, but el teclado doesn’t look anything like keyboard! I was glad I had put my phone in Spanish to be exposed to these words before heading to Spain.

This is true for more than just technology words, but it became especially apparent to me when I realize I had only known words from other Spanish-speaking countries. For example, I knew la computadora because it’s a cognate, so that’s what I learned in school. Imagine my surprise when I heard el ordenador!

3. Having your phone in Spanish is immersion

You can immerse yourself physically by being in a Spanish-speaking country and hearing it around you, but you can also immerse yourself mentally. Changing your language setting to Spanish is a way to immerse yourself in the digital world. Tons of websites automatically start launching in Spanish, so it’s a great way to learn new vocabulary while also practicing your comprehension skills.

4. I was more prepared to travel

Certain websites (or ticket counters in person!) operate entirely in Spanish. This means that to book flights and make an account, I had to understand what it was asking me. Since I’d been used to entering my usuario and clave for all of my personal accounts, I didn’t bat an eye when having to sign up for important things. I had practiced in low-stress ways with my internet accounts, so I was prepared when I had to do important things, like buy train tickets.

5. Putting my phone back to English felt odd

I had gotten so used to all of the features of my phone in Spanish that it felt strange doing it in English again. I had my phone in Spanish for approximately 2 years, and that’s a long time to get used to anything! Overall, it was a great choice as a Spanish learner, even though it was a bit frustrating at the beginning. I’m very glad I was able to learn in an immersive way.