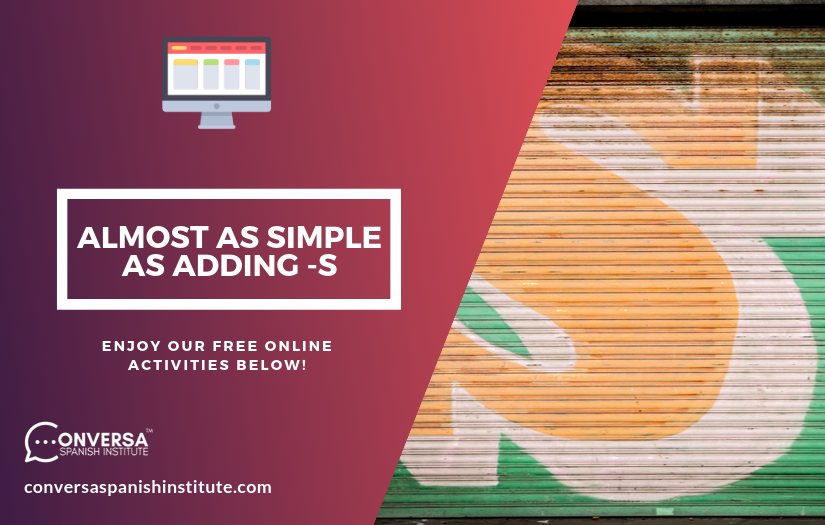 For an English speaker, Spanish grammar is sometimes quite hard to grasp, for example grammatical gender. However, sometimes grammar can be quite similar between languages who share long-past roots, like English and Spanish! Today, we’ll talk about the noun plural, so if you want to learn Spanish AND enjoy free online activities, keep with us!

Nouns have two numbers both in English and in Spanish, singular (1) and plural (+1). The way we turn a singular noun into plural in Spanish is very similar to English. For the most part, we add -s at the end of the word and we get the plural.

But there are many nouns where -s is not enough, we might have to add -es, change the end consonant, or change the word altogether (i.e: box/boxes; elf/elves; mouse/mice). Much like in English, in Spanish there are exceptions and special cases, but the general rules are go something like this:

General rules of the plural

If the noun ends in vowel we simply add -s

If the word ends in vowel + y, traditionally we form the plural with -es, however some new nouns acquired from foreign languages may be formed just by adding -s and turning -y into -i

If the noun ends in consonant, we add -es

If the noun ends in -s or -x, there will be no changes
*EXCEPT:
if noun is only one-syllable long then the plural is formed with -es

These are the main rules, but as with any language, there are many exceptions to the rule. Of course, not even Spanish-speakers know all there is to know, because it can get quite complicated. We recommend you stick to these, though, and you’ll be safe 90% of the time. Why make our lives harder, eh?

If you liked this post, check out our free online activity below and practice forming some plurals. Remember to click the lightbulb if you can’t get it right and want to know the final answers!

AntPrevious8 other ways of saying “¡hola!” in Spanish
Next5 Ways Meditation Can Help You to Learn a New LanguageSiguiente