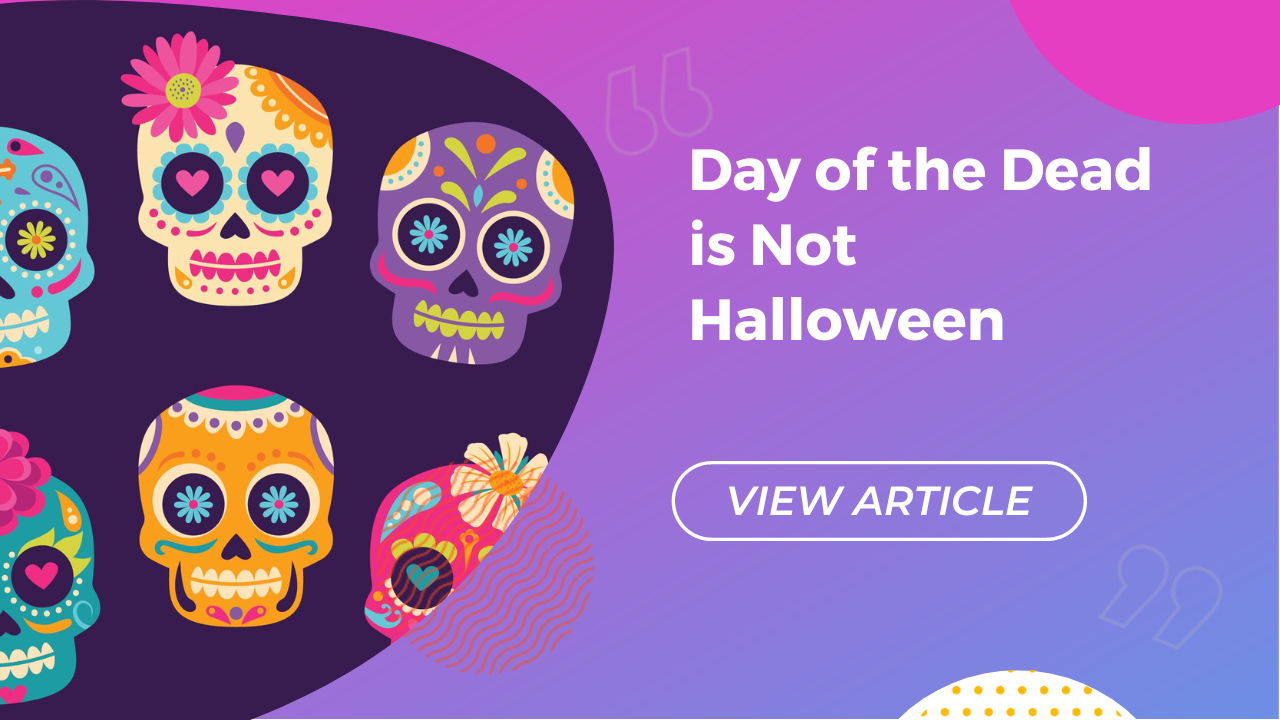 Day of the Dead is Not Halloween

Have you started seeing beautifully decorated altars around your town or neighborhood? Maybe in the grocery store, you noticed a section filled with brightly colored skulls and paper. Day of the Dead is coming up in just a few weeks, and although it’s around the same time as Halloween, they couldn’t be more different. We’ll give you an overview to introduce you to one of the most celebrated holidays in Latin America.

In Spanish, this holiday is called Día de los muertos, or “Day of the Dead” in English. It’s predominantly celebrated in Mexico, but it’s also celebrated in other parts of Latin America, like Colombia and El Salvador. It’s technically celebrated November 1 and November 2, but the festivities can often last longer. Let’s get into some of the differences between Day of the Dead and Halloween!

1. Day of the dead isn’t scary, it’s a celebration

Don’t let the skulls fool you! Day of the Dead isn’t made to be scary or spooky. Instead, Day of the Dead is a celebration of life, and a time to remember those who have passed away. It’s filled with laughter and recalling the beautiful memories of those no longer with us.

The skeletons are all dressed like people to poke a little fun at the idea of death and to remind us that it’s another part of life. Often, you might see skeletons or skulls decorated in memory of someone!

2. They are celebrated on different days

Halloween is celebrated on October 31, where kids go trick or treating, and adults go to parties. However, Day of the Dead is celebrated on November 1 and 2. Although traditions vary by region, November 1 tends to be the day to remember children who have passed, and November 2 is for the adults.

However, there is a reason both of these holidays fall around the same time- they both have histories that connect them to this particular time when the spirit world is supposedly more active on Earth. They both have history going back thousands of years!

Back in the day, Halloween had more of a religious connection. It started from pagan rituals and then was influenced by Catholicism. Nowadays, religion doesn’t seem to be a particularly big part of Halloween. It’s more of a time to dress spooky and get candy!

Day of the Dead still holds a religious component for many people that celebrate. It began with the Aztecs, but after Catholicism was introduced in Latin America, it became a combination of both rituals and ideology.