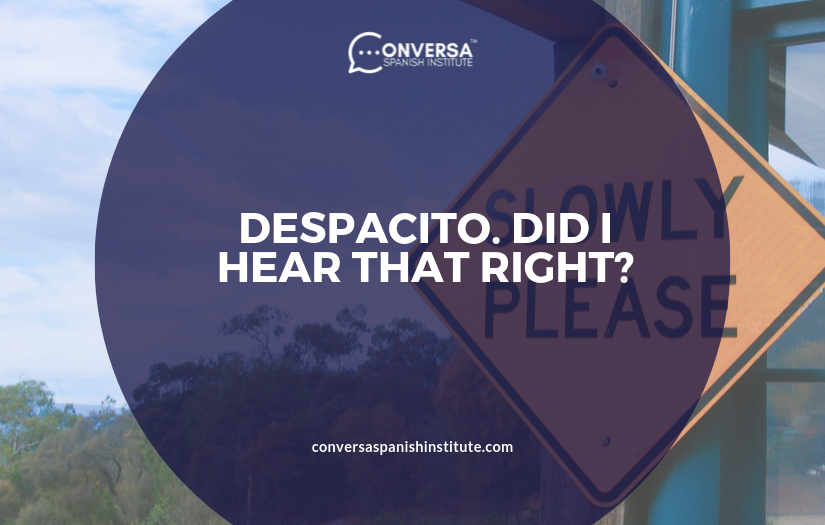 Despacito… Did I hear that right?

It’s often said when learning a new language, that singing along to popular songs can help with knowledge retention, increase vocabulary, and even make the language easier and more fun to learn. And what better way than to do that with Luis Fonsi’s record-breaking 2017 smash hit “Despacito”?

But if you’re singing along to  “Despacito”, which was streamed more than 4-billion times in just six months, you may be surprised to learn the meaning behind the words you’re singing.

As you may be able to decipher from Fonsi’s higher-pitched crooning of “slowly,” in some parts of the song, that’s the translation of the word, “despacito.” With “besito” meaning “little kiss” and “poquito” meaning “little” or, more accurately here meaning “little by little,” we can safely assume the song lyrics contain… let’s call it ‘romantic’ subject matter. But, what about the rest of the song? Let’s break it down.

The Spanish parts of this song start off innocently enough, speaking about the desire to dance (“Tengo que bailar contigo hoy” meaning “I have to dance with you today), but moves quickly forward towards more suggestive content (“Todos mis sentidos van pidiendo más” meaning “All of my senses are asking for more), before launching into the most sing-along-able part – the not-so-innocent chorus, which translates into English as:

I want to breathe in your neck slowly

Let me murmur things in your ear

So that you remember if you’re not with me

Slowly
I want to undress you in kisses slowly
Firmly in the walls of your labyrinth
And of your body, I want to create a manuscript

And that “Spanish rap” that Daddy Yankee performs in the middle of the song? “Bum-bum” is likely the term used by many when attempting to “rap-along” with him during this part of the song, but “bang-bang” is what he is actually saying, along with some other very specific terms to make one’s heart race while their hips are twisting along to the beat:

If you’re wondering if the song could get any more explicit, you’re in luck! Here are some other translated lyrics used throughout the song that make it extremely sexual in nature:

Did you have any idea what you were singing? No? Didn’t think so! Check out the Spanish lyrics along with the English translation while listening to the original version of the song (the version without Daddy Yankee).