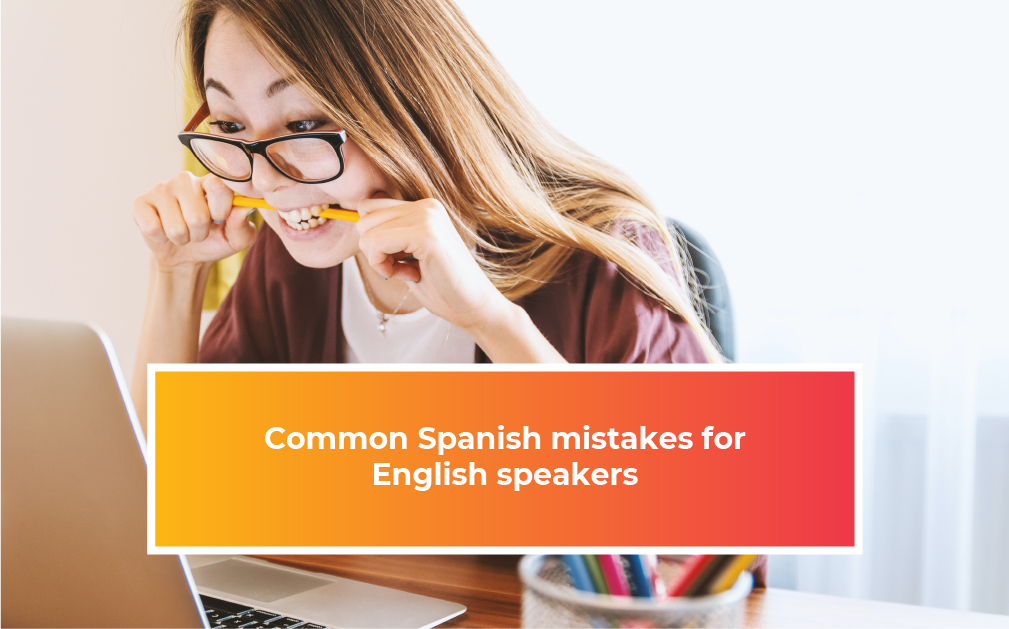 Languages don’t ever translate exactly, which can make it difficult to understand or get your point across when you’re first learning. There are some Spanish mistakes that are extremely common for English speakers, and we’ll show you just a few of them today.

1. Different ways to say ”you”

In English, we have one standard way to address someone, and that’s you. In Spanish, there are actually 3. There’s usted, which is formal, tú which is informal, and vos which is even more informal than tú, and is only used in certain parts of Latin America. The tricky part is knowing when and how to use them. It’s most common to use tú with people you’re close to, and that are your age or younger. On the other hand, you can use usted with people that are older than you, that you don’t know or are meeting for the first time, or that you want to show respect to. Vos is used similarly to tú in the countries that use it, like Honduras, Bolivia, and Argentina. However, every city, region and country has different rules and customs. It can feel overwhelming at first, but with practice, it’ll become clear.

In addition to those, there are also two different ways to address a group- vosotros and ustedes. In Spain, vosotros is informal and ustedes is formal, but they can both be used to address a group. However, in the rest of the Spanish-speaking world, they just use ustedes. You’ll be understood if you mix them up, but in order to be respectful and get your point across the way you intend to, you’ll want to practice the difference.

Spanish also has a concept called ”adjective agreement” which means that nouns and adjectives have to match in gender and number. So, adjectives have to change. If I wanted to talk about a red house instead of a red apartment, the word rojo would have to change to match the feminine noun casa. Therefore, I would say la casa roja in order to make the adjective agree in gender and number. Since English isn’t a gendered language, using adjectives correctly can take lots of practice.

In English, there aren’t any special characters that go above letters, like accent marks (the ´ symbol above vowels) and tildes (the ˜ symbol above the letter ñ). In Spanish, these symbols are not optional! Often, they can completely change the meaning of the word. Spanish has rules on where to put the stress or emphasis on a word. When a word ”breaks” that rule, an accent mark shows you how to pronounce it. Most monosyllabic words don’t have an accent mark, but they do when it shows the difference between meanings. For example, the word tú that we learned above means you, but tu without the accent mark means your.

On the other hand, tildes mark the difference between two letters in the Spanish alphabet, n and ñ. Since they’re two completely different letters, omitting or forgetting the tilde changes the word entirely, as well as it’s pronunciation. The n is pronounced like the n in Nashville, and the ñ is pronounced like the ny blend in canyon. That little squiggle can mean the difference between saying ”a/an” and ”fingernail” depending on if you say una or uña.

Being aware of these common Spanish mistakes for English speakers is the first step in mastering them. As you’re practicing, pay a little extra attention to these 3 components, and your confidence and proficiency will improve in no time!